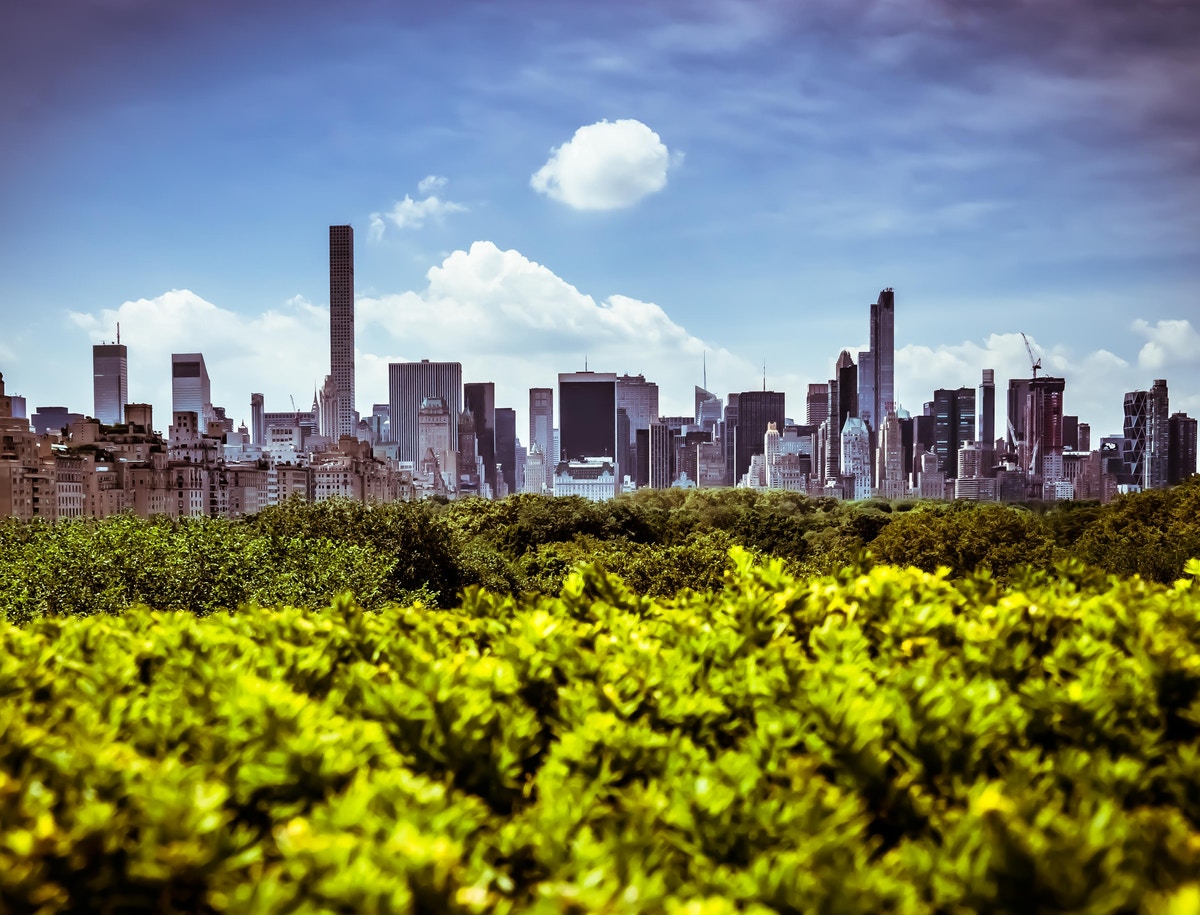 Tears and triumph: My journey to help my daughter move to Brooklyn.

Every time I see a pregnant woman I think of it as a rare sign of optimism. Well, baseball season is starting so there’s that too. But to bring a human being into this world seemingly takes a lot of courage these days given the current political, environmental and social climate. This is a very volatile, uncertain and divisive world. Yet, people, albeit at some of the lowest rates in a very long time, are still having kids, building families, and embracing a “traditional” American existence.

What that optimism doesn’t inform you is that someday, down the road, at a time unspecified, you’re going to have to let go of that child and let them build a life of their own. And that optimism you felt in the beginning has now morphed into a blend of excitement and fear, immense pride and gut wrenching sadness.

It’s just about 950 miles from my driveway in Thiensville to my daughter Sophia’s front door in Brooklyn, New York. It’s a 14-hour drive through the mountains of Pennsylvania and the flatness of Indiana and the hectic traffic of Chicago. There has never been a physical distance between us so profound, and I feel it. She’s there, and I am in another place commonly called “uncharted territory.” How did I get here?

There is a lot to be said for a human being who has the self-awareness to know that their surroundings have given them just about all it can give. The relative comfort of the relatively small suburb of Thiensville would be something so easy to fall into like a comfy pillow. And my daughter, who was gainfully employed with a successful casting company (since arriving in NYC she started working at Glossier’s Flagship store in SoHo) could sit on the homey couch all day, mere steps from the refrigerator and manage her numerous and time consuming projects in cozy fashion affectionately referred to as “ath-leisure.” A cushy life, for sure, outside of the various casting emergencies.

I loved having her around. I looked forward to seeing her every day. Her and I are very much the same person. And that’s why when she announced she was going to move to Brooklyn it didn’t come as a complete shock. Her and I are antsy people, always looking for opportunity and growth, having our left foot planted in “what is” and our right foot firmly placed in “what could be.” We aren’t living on a pre-conceived trajectory and predictability is just too damn predictable. The unknown is alluring.

Two weeks or so before the move, our living room started to populate with boxes, her life lay out in front of us. Clothes. Books. The things that make her feel comfortable and at home. But things you couldn’t see were also being packed away; our daily conversations about film (Are you watching 17 Again, again?) and music (That song sounds like Harry Styles copying Oasis copying the Beatles), and memes (You got games on your phone?). Those conversations would now become long distance, thanks to the convenience of technology that wasn’t available when I flew the coop in 1985, moving to Milwaukee from Northern Illinois.

All that stuff in the living room ended up in the back of our Pathfinder leaving scant room for Sophia, my wife, and me. During the packing, in the weeks leading up to the journey, the depth of the profound nature of this really didn’t hit me – my daughter will likely never live under the same roof with us again. There will be growth for her, certainly, in Brooklyn, and growth for us as well, as we navigate an environment where we were all together, and getting used to her absence. I can’t believe I’m saying this but in the days that she has been gone, Instagram has given me solace, her posts serve as evidence that she’s getting along well in her new life with her new roommates. I’m actually jealous, I love New York City so much.

It had been a while since I’d been to NYC. And when we pulled up to her apartment in Brooklyn, my Milwaukee brain overtook me. Milwaukee, considered one of the most segregated cities in America, has poisoned us all – the existence of an “inner city” a daily reality. That perception, that the rest of the world is segregated like this, is a terrible one. Conclusions were being jumped to at a damn near Olympic level.

Where was my daughter going to be living exactly? What is this neighborhood? Okay, calm down.

We were all seeing Sophia’s new living arrangements for the first time. It wasn’t much to look at from the outside; a used car lot was to the right and a local deli/grocery store was to the right. Low income high rises sprawled across the street. The door to her apartment building had a bit of graffiti on the bottom; notes to delivery guys strewn across a tiny square window.

As we moved her in slogging stuff up three long staircases in an elevator-less four story building, I started to notice something during my numerous trips. The signs of life were remarkable. A group of four African American twenty-somethings walked by. Then a white couple, hand in hand (NYC hipsters, perhaps?). Then I saw two young women wearing hijabs. I popped into the grocery store next door and a friendly Hispanic man helped me out.

This was the world, right here outside her front door, and it was amazing. My daughter would be immersed in culture here. I felt happy, and hopeful.

But the move was far from over. And when the IKEA delivery guys declared that they would not carry the seven or so boxes up the stairs, I was in for the workout of my life. The emotional weight of the trip was not to be outdone be the physical weight of it, and Sophia and I spent what felt like an eternity getting the boxes to the top floor. Sweat dripping down my nose, legs wobbly, I was drained, and she was too.

My wife thought I was going to have a heart attack. But hearts were hurting in more ways than one.

The exertion makes me think of the overwhelming feeling I had when she was born, that you would do anything, literally anything for your child. I would much rather suffer than see her suffer, I wanted to be the one doing all the work, even though it just wasn’t humanly possible. The physical hurt is easy to handle compared to the emotional hurt, and later on, when Sophia was having moments of trepidation about the move, you have to do everything you can to stay emotionally strong. You cannot show weakness and you must reinforce that this move is the exact right thing to do and landing on your feet may take time, but you will do it. The loneliness of being away from your family is fleeting.

A parent’s instinct is to protect. But there are crucial moments in your life when you just have to let go.

Sunday morning, our last day in Brooklyn, my wife and I had breakfast at the hotel, staring off into space. We were acting like one of us was about to go in for major surgery or something. The weather was sunny that morning, and a dusting of snow covered our car.

It was like a new chapter was about to begin but neither one of us wanted to be the one to write the first word. But the person to write it was Sophia, the leap into a new chapter a scary one, an exciting one, an unknown one. I could sense in her eyes a new confidence, a sureness tapped with an ounce of fear. Her life ahead is a great big world of question marks and exclamation points. I was sad to have to leave her, but felt a twitch of envy that at 52 years old I never did anything like this. As I thought about the day she was born, I realized what I was witnessing was another kind of a beginning of life. A journey ending is another journey beginning.

Is there an easy way to do this? No, there isn’t. And as we approached her apartment and found a place to park (parking in Brooklyn not that bad, really) deep breaths gave way to deeper breaths as we ascended the stairs one last time before we would make our way back to the antithesis of NYC, Thiensville.

We embraced. We cried. And we cried some more. It was a great day. We left NYC at around 9 AM and pulled into our driveway at 10 PM. Exhausted. Emotionally, physically, mentally. Rarely is transition so visceral, so real.

A few days later Sophia let us know that she forgot some of her posters from her room. There they were, in our garage, in a tube. I took a look inside and saw her “Vote for Ladybird” poster from Greta Gerwig’s 2017 film, Ladybird. We had recently re-watched it over Christmastime, a brilliantly told story about a daughter’s coming of age, feuds with parents, relationships with classmates and dreams of the future, and life, lots of life.

My favorite moment of Ladybird is the scene in which Ladybird is trying on dresses, Mom standing outside the fitting room. This exchange kills me every time:

Mom: I want you to be the best very best version of yourself that you can be.

Ladybird: What if this is the best version?

Ladybird, like Sophia, ends up chasing her dreams to New York City. And also, like Sophia, somehow innately knew she was not the vest version of herself yet. To achieve that, you have to do what is difficult and discomforting. At 52 years old, I still grapple with that and have all the same fears I did when I was 20.

I wrote “I Heart You” on a tiny post-it and sent the posters to Brooklyn. A week or so later I saw an Instagram post on Sophia’s feed, the post-it now affixed to her mirror. Mission accomplished, and distance between us shortened, at least for a little while.